CaféStadt could be navigated by scent alone. Most places in the south held to the tradition of Kaffee und Kuchen. None followed it with the religious fervour of CaféStadt.

Not the real name of the small river bound settlement, but real names count for nothing. Given names have old magic.

Arriving by train was different than anywhere else in the Free State. Most central stations, Hauptbahnhof in the local language, hung thick with the death reek of oil, the burning of diesel or sparks scorching the air. In CaféStadt oil stood no chance. The platforms were thick with two competing aromas. The beginning and the end. The beginning was the rich cracking of the roast, coffee beans toasted deep in the fireboxes.

The end was above. The vast boilers of the trains, stoked on their journeys across the alps, in any other principality would be filled with water to be wasted. Here their work was doubled by crushed arabica, taps on the side of the engine to fill grande and venti cups held by weary travellers.

This was mass production, weak and vague. The only richness came from bulk rather than refinement.

The streets piped out from the station, ribbons of craftsmen, working fruit and flavours into small hearts of pleasure to be consumed after the sun had peaked. Each street housed bakers specialising in different confections.

Running down toward the main bridge the street was lined with pâtissier specialising in pâtisserie flavoured with flower petals. Though rivals they avoided too many conflicts by each only using a single flower.

Herr Bansett owned the shop nearest the top of the road. He made his concoctions only using the flowers of the honeysuckle. Once picked they hung to dry above his doorway for three days. On the fourth day he picked the best flower heads letting the others fall into the gutter.

Across the road his estranged brother, Herr Bansetter, made the same recipes, only using Jasmine. It was not clear if his choice of scent was the reason or result of their feud. One opened only during daylight hours, the other between dusk and dawn.

Further down, rosehips and violets suspended from racks, petals picked off in the breeze. No matter what time of day a visitor walked down the street their boots crushed the skin of petals into the cobbles refreshing the air with tones of forgotten gardens and childhoods hiding in bushes. The pâtissier had no need of adverts. Visitors carried the taste of their cakes enwrapped in their clothes if not within their stomachs.

Running cardinal opposite was a different kind of street. LuitpoldStrasse only sold one type of torte, each MeisterBäcker claiming to make the best. The finest in CaféStadt if not the nation. In the morning each MeisterBacker would send his apprentices down to the river to buy the best apricots from the morning’s barges. Each seller would hand around a sample of their cargo. Each apprentice would examine the fruit in turn. Test the firmness, run their fingers over the hair. Bruise the skin and scent the fruit on their fingers.

The MeisterBäckerei of LuitpoldStrasse did not choose their apprentices for their baking prowess, but their speed and aggressiveness in the street. The route from the docks to LuitpoldStrasse ran with blood every morning, and it was said the poorer quality PrinzeRegenteTorte tasted more of iron than Apricot.

In the alleys, behind the main street narcotic bakers, used purple apricots, but anyone tasting them was sworn to secrecy on pain of drowning.

Across town were the coffee yards, each one a self contained world where the fumes were cycled back in to try and prevent rivals from guessing at the blends each tribe of Baristas used.

Some yards were vast complexes, walls so stained with caffeine it was said to touch one would absorb enough through the skin to burst a person’s heart.

Others were nothing more than a single chair in front of a single table that held a single espresso cup. Reservations were passed down generations like green eyes. They called it The Death of Drinks, because when the flavours filigree’d over your tongue every beverage afterwards paled to ghosts.

In the centre of the city sat the House of Geshmackpassenden, whose experts wore cloaks of pure dew to keep their skin free from the fragrance of the city and blindfolds to mark their devotion to taste. Each spent a lifetime finding the perfect pairing of cake to each blend of coffee and their word was sacrosanct. 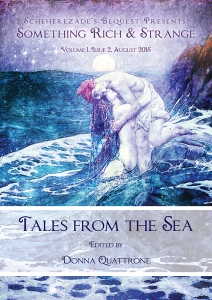 Today sees the publication of the second issue of Scheherezade’s Bequest Something Rich and Strange. This issue turns its glance beyond the coast.

There are fresh takes on old stories, and new fables, salt stained and sun bleached. I’m so pleased to have my story ‘Mare of the Tides’ in such good company, especially alongside work by Sarah Cleto and Lynn Hardaker.

You can find out more over at Cabinet des Fees.