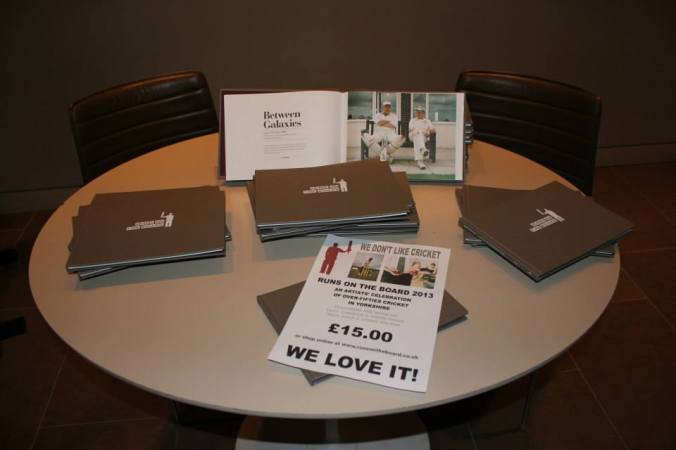 The original inspiration for my approach to Runs on the Board was Italo Calvino’s Time and the Hunter (UK/US), which led to me writing Willow;

With a gardener’s steady hand he planted the willow shallow in the short grass. Roots take well here. Branches sprouted in all directions, each bearing a single red fruit, skin like bruised pomegranate. He chose one curving bough and watched it arch to the left. Those rejected crumbled to dust on the breeze until the one remaining fruit settled in the grass. Seed to windfall in a glance.

Using this as a starting point it gave me to approach cricket from a different direction.

There are no Hawk-Eyes here. Only a vulpine gaze dusted with half a century of pollen, scored by the track of a thousand overs worth of leg break and off spin. Behind oval pupils the ball plays out again and he makes his decision. The players wait, a choir of appeal, their chorus scrubbed by distant traffic. The umpire raises his finger above his head. Applause ripples from the fielders, surrounding the retreating batsman like heat haze.

Suspended dust hung from twine thin light that somehow found its way through the sawdust glass of the windows. The Gamemaker lifted the workshop door shut, breathing in the linseed oil and cork air. He shrugged off his old fleece, hanging it on a nail, instead slipping on his axle grease coloured, once white, coat.

The radio struggled to find a long-wave signal in the heat-haze. With a shake of his head he let the words fade in and out, delivering updates in stretched, cracked voices.

His latest creation sat in the middle of the bench. A wooden slotted drum balanced on a lathe turned stand. Reaching his glasses from a pile of shavings the Gamemaker peered at the recently dried timber, thirty layers of varnish pinning light to the woodgrain.

Nodding to himself he ran a palm over the drum. With his other hand he turned the polished brass handle, a series of hidden tooth and nail gears rotating the cylinder. A slight breeze born of still air spun out from the centre. Satisfied, the Gamemaker dragged across a stool and sat down, stretching out his back and hands. Life returning to stiff tendons.

From behind the radio, still singing with faint Raudive voices, the Gamemaker pulled an old manilla envelope. He read the crossed out address on the front. For a moment a memory of a brick, wood-fronted, hut by a white flagged line made him smile. Unfolding the seal-flap he pulled out the thirty paper strips inside.

Holding the first up to the light he was surprised the half century old paper survived. In places red marks and grass stains risked obscuring the sketched figures. For a moment he thought about cleaning the strips, then shook his head. Marks and scars are earned and should be worn with pride.

Each figure was faint, the pencil scored lines in the paper marking the shape as much as the sun faded graphite. Satisfied he placed the first in the zoetrope, pressing the strip into the thin slot running around the inside edge of the barrel.

Pausing, he poured a cup of tea from a lukewarm chipped pot, drinking the brick red liquid in quick mouthfuls. Through the slots the figures waited, unmoving. Resting.

Drink finished the gamemaker lowered his stool and grasped the zoetrope’s handle. The players came to life. The bowler’s arm released the only intentional colour on the paper strip. The batsman met the fleck of red, sending it careering to the upper edge of the Zoetrope. From the base of the device came a sound of applause across a sun-bleached ground. He played the strip five more times. Each revolution the bowler released the red spark at a different moment, the batsmen streaking it toward a different point. After the scene had played six times the Gamemaker took out the paper strip, flattened it before placing it back in the envelope and slid the next paper strip into the device.

“Except in the United Kingdom, or if local regulations provide otherwise, after 200 runs have been made off a ball in First-class matches, the captain of the fielding side may demand a new one”

A battered Pearmain of a thing the ball sat half hidden in the grass beside his feet. Every so often a confused, drunken wasp crawled slowly over the surface and finding no flesh to feast on took off again.

Shivering with the disappearing light he tried to rub life back into aching arms. The game had been long that day with overs of four, five and six balls running into each other. As much time spent searching in the field scrub for the ball as bowling it down the stamped grass, makeshift pitch.

Having done service in a millennium of overs, leather scuffed to bunting edged the surface of the ball. The boy grasped a scrap and pulled it loose. Coming away in his hand the fragment dislodged a length of seam, drawing it free from the stitching. Dropping the first piece to the ground he noticed a second strip had come loose. With a compulsion usually saved for scabbed knees he grasped the leather and pulled it free. Instead of tightly wrapped string underneath he glimpsed the shellac shine of fresh red leather. Curiosity gripped and he tore away the next strip then the next. Gold leaf print of the fresh ball caught the tail end of the day’s light as he peeled away the last of the skin from the old ball, revealing the new underneath.

Fresh, unscarred and unbowled the Duke County International felt just right as he walked out to the crease. Glancing across the ground he saw those boys from up-field and down-field standing at slip, mid-wicket, extra-cover.  Now, many years after those long summer games, they all played on the same team. These days the aching arms were already there before the game, but the joy was still in the pitch and the bat and the sprint of the fielders. He smiled to himself and prepared to bowl the first over of the game.